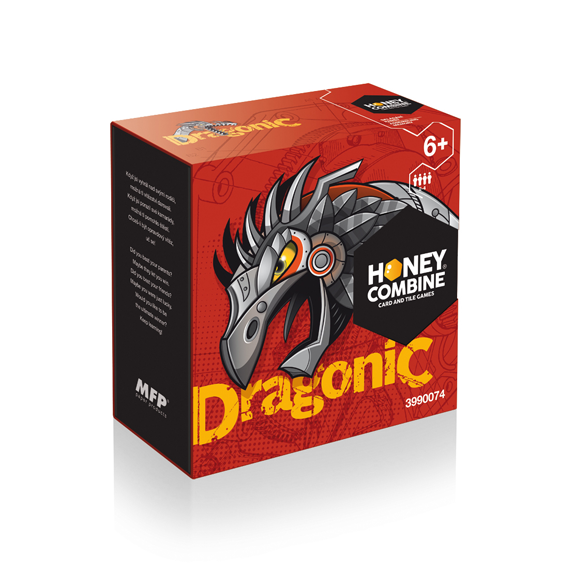 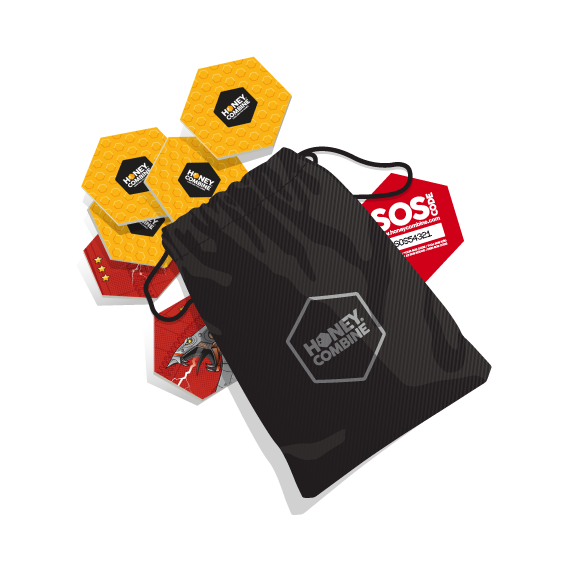 It’s the year 3016... Deep underground inside dark factories, your enemies are assembling dragon monsters of unseen power and appearance. If you fail to beat them in time and create your own dragon of such exceptional power that is impossible to describe in words the evil force will win. Prevent the monsters from burning the planet to ashes and your enemies ruling with an iron fist.

The game DRAGONIC consists of three rounds. For each player, the aim of the first round is to assemble a dragon monster faster than his opponents. Each player chooses the body of his dragon from the tiles and all other dragon body tiles are put aside. The remaining tiles are then shuffled and placed face down in any shape or order on the playing surface. After deciding or drawing the playing order, the first player flips over any tile so everyone can see it. Each tile depicts a part of a dragon (head, wings, tail, paws, legs and dragon’s fury) and a number of stars indicating its strength. It is up to each player to decide whether he wants to take the tile and add it to his dragon’s body or put the tile back face down and wait for a stronger one that he may flip over in one of his future turns. The next player then takes his turn. Each player can only flip over one tile in each turn and he may or may not choose to add it to his dragon’s body. Should a player flip over a tile with a dragon part that he has already added to his dragon, he must put it back face down and is not allowed to choose another tile. The winner of the first round is the player who assembles his dragon first. The winner gains 1 point for the final scoring.

In the second round of the DRAGONIC game, all the remaining players assemble their dragon monsters. The last player still assembling his dragon stays in the game but must not delay it and is obliged to complete his dragon by always taking any required tiles as he finds them. When the dragon monsters are assembled, the players then calculate their strength by adding up the stars on all tiles that form their dragon. Each player then announces the strength of their dragon to the other players. The winner of the second round, and the scorer of the next point, is the player with the strongest dragon. If a player owns a dragon monster which has won both rounds therefore being the fastest and strongest dragon monster of all, he wins the DRAGONIC game without further battle.

The third round of the DRAGONIC game is represented by a final battle, in which the player with the strongest dragon challenges the player with the fastest dragon. The challenged player recounts the stars on his opponent’s dragon and nods his head in accepting the challenge. Both players flip over their dragon tiles so they are face down and all 14 tiles are then mixed up and placed in any shape or order on the playing surface. The challenger starts the battle by flipping over any two tiles so both players can see them. If the tiles depict different dragons’ parts, the player flips them back over face down and his opponent continues. If the tiles depict the same dragons’ parts, the player takes them and continues playing for as long as he succeeds in finding pairs of dragon parts. The first player who finds four pairs of tiles depicting the same dragon parts wins the next and deciding point and becomes the winner of the third round. At the same time he becomes the ultimate winner of DRAGONIC.